How I Break Down Genealogy Brick Walls 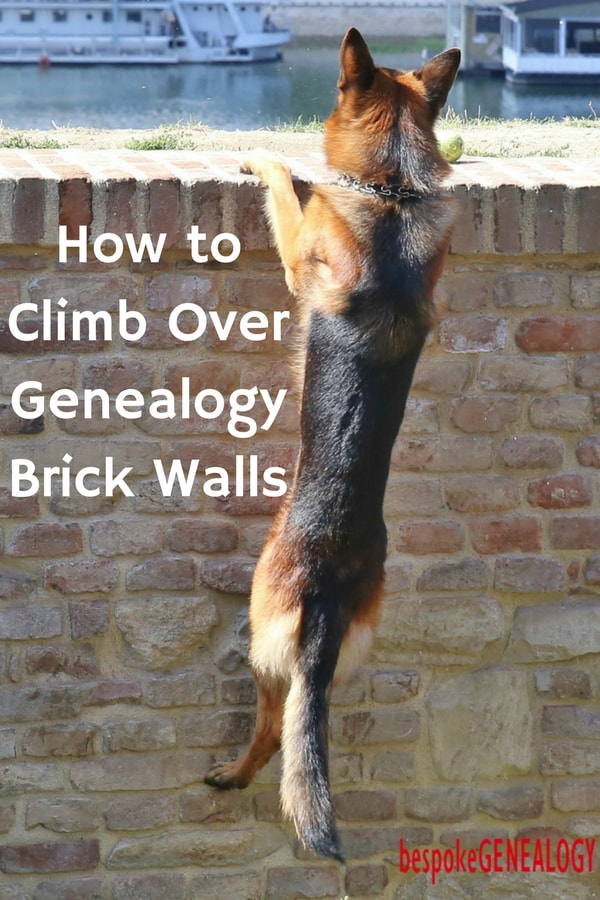 We all come to genealogy brick walls sooner or later; the person we can’t find or verify. In England and Wales, civil registration (the compulsory recording of births, marriages and deaths) began in 1837 and prior to that, it was the church that was responsible for keeping track of vital records. Some parishes have records going back to the 1500s, but most of us are lucky if we get back to the mid 1700s before we hit that brick wall. I know the situation is similar in other countries. Many, if not all of us, have hit walls much later than that though, maybe even in the second half of the 20th century. I thought I would run through some of what I do to avoid hitting walls too soon and when I do, how I try to demolish them.

I should say though, that there will be some brick walls that will probably never be demolished because the records no longer or ever existed. In cases like these maybe DNA testing is the only hope. For example, in my own tree, my paternal grandmother was born “illegitimate” with the father unknown. I’m not very confident in ever finding his identity, but I’ll keep trying. However, in many cases, we can break down brick walls with information we can readily access.

When I’m researching I always try and avoid hitting the wall too soon by keeping a log of all my work and recording and verifying all sources accurately. This is really important so that you can go back and check your work if you hit a problem. It also prevents you repeating the research you have already done. If you haven’t already done so, you can download a research log form by clicking the button at the top of the page. It is also important to use primary sources (birth, death, marriage, census records etc) wherever possible and try and verify secondary sources (newspaper articles, verbal recollections etc) with primary sources.

Often when we start our own family tree we have a set of assumptions based on what we’ve been told about our relatives, or what we’ve seen written down in family documents. These should all be tested with verifiable sources as soon as possible. I remember years ago I was living in a village in the east of England and a near neighbour disappeared for a while. The talk in the community was that he was working on a construction project in the west of the country. Years later, I discovered that he had actually been serving a prison sentence in Dartmoor, Devon for forgery. So, I can imagine that his grandchildren will have grown up with some inaccurate assumptions about their grandfather.

I learnt a bunch of problem solving techniques at business school and over the years, I’ve adapted a few of them for genealogy.  The most successful one I’ve used for breaking down brick walls is called “alternative scenarios”. The technique was originally developed by the Shell oil company to plan for possible different scenarios for things like OPEC increasing production, or a military coup in Venezuela. I have adapted it to explain something or, more often, the absence of something. I’ll give you an example from my own tree: I could not find the marriage record of a relative and his partner. Their living descendants told me that they were devout members of their church and had had all their children baptised, so based on the norms of the time (1920s), I had no reason to doubt that they weren’t married. Initially I had assumed that there had been a transcription error in the indexes which is why I couldn’t find the record.

So using alternative scenarios, I made a list of all the reasons I could think of to explain the the missing marriage record:

Once you have a list of reasons, you need to decide how you are going to prove or disprove each one. In this case, finding which church or churches they were most likely to have got married in and looking through the parish registers until a record is found would prove either of the first two reasons. After you have decided how to prove/disprove each reason, the next step is to start with the easiest to eliminate and go through them until (hopefully) you get a resolution. In this case, I started with the middle names as surnames, as I could easily look through the marriage indexes online.  This was quickly eliminated and I moved onto seeing if one of them was already married to someone else. Bingo! This was the reason; the man was already married, not only that, he and his wife had three children. I was able to verify that this was the right person with other documents.

I have successfully demolished a few brick walls with “alternative scenarios”.

Widespread literacy only became the norm in many countries in the late 19th and early 20th centuries, so, often a cleric would change the spelling of a name when recording a vital event as he wrote down what he thought he heard. My own name, McGowan, is often spelt MacGowan, McGown, McGow or is anglicized to Gowan, Gow or even Smith (the literal translation). So I always look for all possible spelling variants.

Before the 20th century there wasn’t a great deal of mobility. Of course, seismic events like the Irish potato famine or the Highland clearances forced people to move to the cities or emigrate, but when this did happen people often did this with members of their extended family and neighbors from the same community. So if someone disappears, say after the 1851 census, it often pays to look for other members of their family or community (clusters) in later documents like the 1861 census. You might find some clues. Elizabeth Shown Mills calls this the FAN principle (Friends, Associates, Neighbors); you can find more information about it here.

Finally, illegitimacy is another common cause of brick walls. See How to Deal with Illegitimate Ancestors for some tips in looking at this problem.

I hope some of this can help you with your brick walls.

If you’d like some further reading on problem solving and brick wall demolishing; check out these books:

There are also more genealogy books on our Resources section. 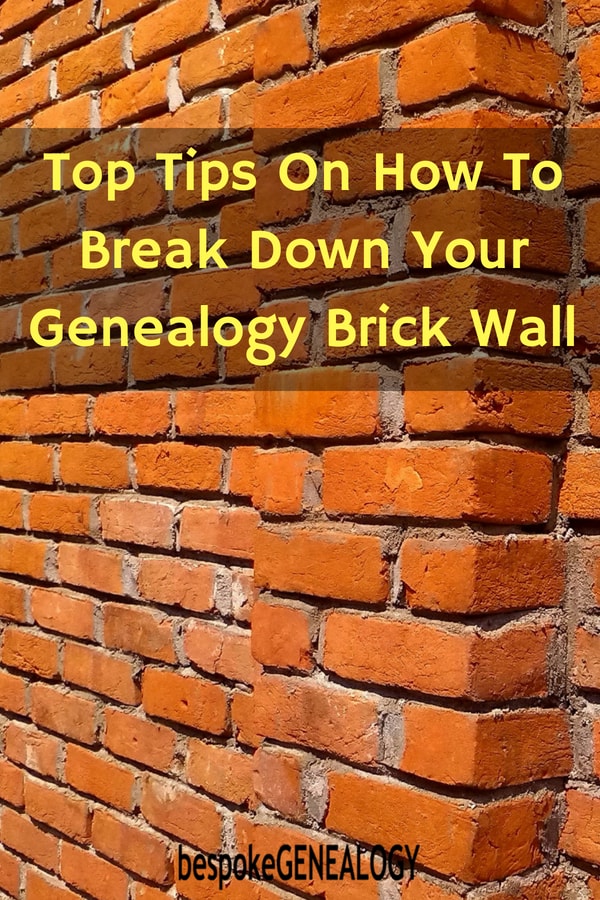 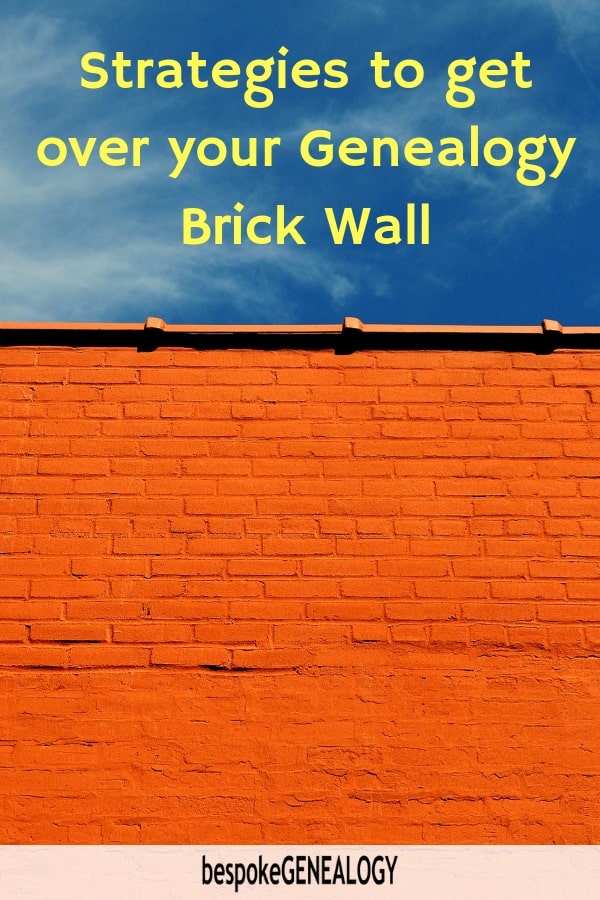 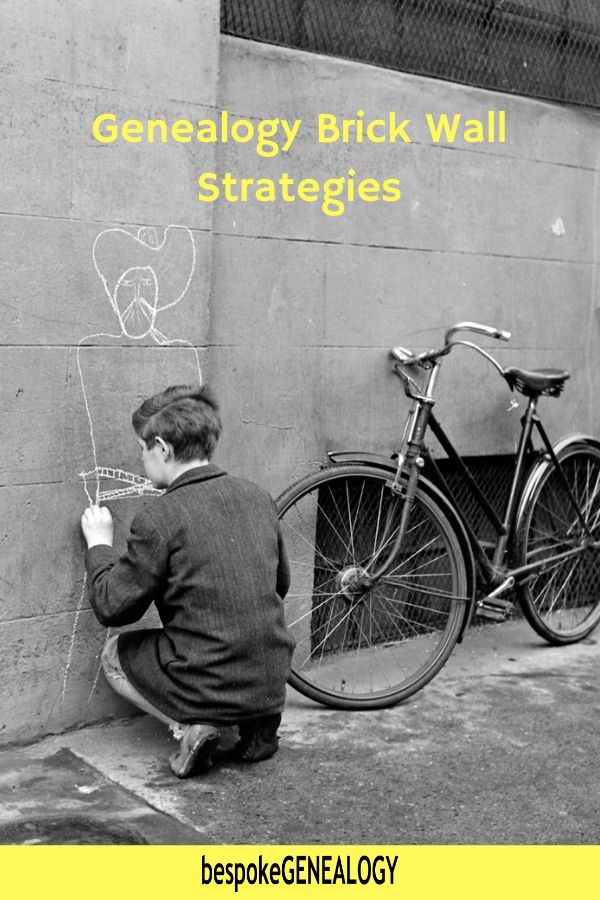 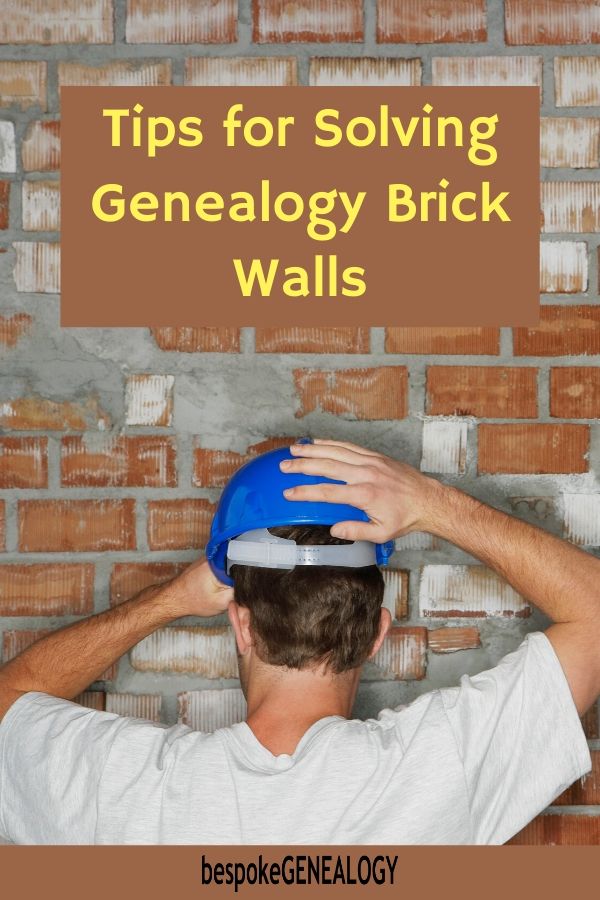